Evian the destroyer of gods

All Spirit Coalition of Deity

Evian Rigel is a rogue Goddess that is in search of her lost memories and a cure to a dying world. A disciple of the All Spirit Coalition of Deity, Evian was a genius, hailed as a "God among Gods". Though her true talents were not fully display in large scale galactic exhibition, her reputation throughout the stars has earned her reverence beyond imagination.

Evian was an orphan who became a pupil of and adopted by James Rigel. Her talents, aptitude, and determination were considered by James to be that of a child phenom in which the world has not seen. Under his tutelage Evian gained an acute knowledge of battle strategies, leadership and sentient weapons handling. Wanting to show appreciation for her adopted father's guardianship, Evian sets out on a path to redeem James' war torn world. As Evian begins her journey of redemption she realizes that the problem of her current planet is only just the beginning.

Evian is a tactical, prudent, and blunt individual who is never afraid to take actions into her own hands. She is a calculated individual giving her superior capabilities to assess situations and develop strategies around that making her a natural leader. Evian's ideology is said to bring people to her, inspiring devotion, loyalty and infatuation from most of the people she meets through resolve and candor that could change a person's worldly perception.

Evian embodies a persona uncommon to most and becomes widely known for her approach to encounters with other beings. Due to her immense empathetic dexterity it makes her decisiveness absolute; merciful or merciless no gray in between. She is straight forward which gives her strong leadership qualities admired by all that follow and worship her. She has complete balance of the Feminine and Masculine energies inside her which makes her charisma almost irresistible and completely alluring.

Evian is a medium height dark-skinned young woman with brown eyes. She wears a form fitting high-collared, long-sleeve battle suit with gloves. When the lights on her battle suit are lit it enhances her natural mobility and resistance to Qi energies.

At times she is seen wielding a large shotgun and pistol style Qi Blasters.

She wears her dark brown hair pulled back into a large poof.

When working covertly she is typically wearing a large dark colored hooded cape.

"You serve a god now that is obsolete I will be the new god of this land...this planet...this Galaxy...this quadrant"

"There are one too many sheep in this existence. All asleep in there miserable existences. And I shall wake them all and give them purpose."

"You are not a God seed you are not the fruit of the divine. You are just trash that I am ready to clean up."

"...save this message for your God when he meets you in the next world and while you are at it tell him the 'Destroyer of Gods' wants to live up to her name"

"I will be the deliverer of your karma"

Leviathan release where her Qi energy manifests into a large water beast upon eye contact. The manifested Qi beast bites into her opponent's Qi field rendering them unable to move. 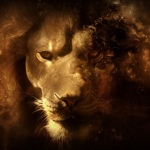